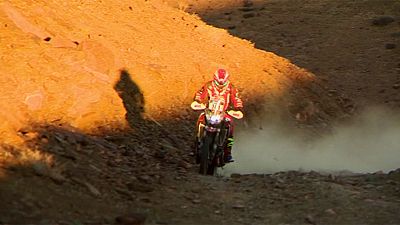 Gev Teddy Sella strengthened his grip on the overall race lead of the Africa Eco Race on Thursday when he won stage four for his third triumph this edition.

The South African KTM rider beat the field over the 409 kilometre test from Assa to Remz El Quebir in central Morocco.

Overall Sella holds a one hour and four minute lead over Italian Paolo Ceci who was second on the day.

Honda’s Ceci has now registered two runners up finishes and a win from the first four days of action.

In the car category Thierry Magnaldi tasted success for the first time this edition.

After two runners up finishes the Frenchman steered his Ford across the line for a maiden win just over four minutes clear of Russian rival Vladimir Vasilyev.

Vasilyev, driving a Mini, has led the overall standings since day one and now holds a 27 minute and 25 second advantage over Magnaldi.

It was the first stage Vasilyev has failed to win this edition of the race.

In the trucks class Sergey Kuprianov celebrated his first win in the ninth running of the event.

He crossed the line some six minutes clear of Karginov who tops the general classification in the category.

He is now some one hour and 20 minutes clear of Czech Tatra driver Jaroslav Valtr.