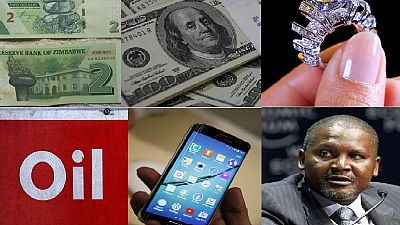 Business like politics is a key driver of activity on the continent. Whiles the African Union (AU) continues to drum home its call for an integrated continental market, different countries and regions on the continent recorded successes and loses on the economic front.

Whiles the drop in commodity prices, especially oil affected the oil producers, other factors like insurgency affected economies in the Lake Chad region, protests hit the Ethiopian economy to an extent while drought affected Horn of Africa and southern African economies.

The currency came up for discussion with a call for it to be reviewed because it was outdated. This was the position of Executive Secretary of the United Nations Economic Commission for Africa, Carlos Lopes.

But bank chiefs in the region held that the currency remained relevant in trade transactions fending off the international criticism. On December 24, Heads of State in the Central Africa region refused to devalue the currency during a CEMAC summit in Cameroon. The meeting was attended by the IMF boss and French finance minister.

Nigeria slips into recession amid attacks on oil installations

Nigeria had mixed economic results in the year under review. From reportedly losing its spot as the continent’s biggest economy, the effect of Niger Delta militancy on its oils revenue and slipping of the economy into a state of recession after over two decades.

President Muhammadu Buhari came to power in 2015 with the promise to ensure increased security, to fight corruption and to fix the economy in a time when oil prices were on the downward spiral.

Even though there are visible signs of successes in the area of security and his anti-corruption war, the economy remains his biggest challenge. His first budget presentation was also fraught with padding allegations. The second which he presented to legislators early December 2016 was one meant to take Africa’s most populous nation out of economic recession.

Zimbabwe’s economic woes in 2016 all but heightened in the face of two key factors, a currency crisis worsened by a crippling drought that swept across the Southern and Eastern Africa region.

In response to these challenges, the government mooted the reintroduction of bond notes equivalent to the United States dollar. Opponents of the move clashed with police during protests, they filed a court case that failed to halt the printing of the notes by the central bank.

Whiles at it, the government also solicited and received lots of food aid notably from the Chinese and the Indian government. The ruling Zanu PF refuted allegations that the donations were only given to party loyalists.

As a shining economic light in East Africa, Kenya’s economy received an automobile assembly boost with the return of German automaker, Volkswagen to the market it left decades back.

The announcement of the opening of a Thika assembly plant was made earlier this year at a joint press conference by the government and the company. The reopening was officially done last week.

Kenya’s first donkey slaughterhouse was also up in our top business news from the country. In the Rift Valley area, the three million US dollar slaughterhouse opened in November.

The Chemongoch abattoir has a capacity to slaughter about 100 donkeys a day with the meat expected to be exported to China where it is said to be in high demand. The venture seeks to target the export market. Nevertheless, the slaughterhouse is yet to export its first consignment.
SUGGESTED READING Kenya’s first donkey slaughterhouse

This was according to the WEF’s latest ranking of ‘The Global Competitiveness Index.’ The country however ranks at number 45 on the global ladder of 138 countries with a score of 4.49, a step from their ranking last year.

Mauritius is sandwiched by Italy and Portugal. South Africa, Rwanda, Botswana and Namibia completed the top 5 places for sub Saharan Africa. The WEF has been measuring economic competitiveness among countries since 1979.

Bostwana’s diamond fair was an even that Africanews took special coverage of with our journalist Claire Muthinji joining major players in the capital Gabarone.

South Africa according to Bloomberg estimates overtook Egypt to the position of second biggest economy on the continent. It was not long before they toppled Nigeria to become the biggest.

South Africa over the year also had its credit ratings thrust into the limelight against the backdrop of economic uncertainty relating to the appointment of finance ministers and the high level corruption linkages between President Jacob Zuma and the Gupta family.

The anti-government protests in Oromo and Amhara regions plus in the capital, Addis Ababa adversely affected the economy and tourism. Protests led to destruction of public and private property.

Dangote industries for instance were affected by rampaging protesters. The government imposed a 6-month state of emergency to quell the protests, most European countries issued travel alerts to the restive country – most have now been lifted except for the US.

The tourism industry reported that the expected revenue fell by some $44m as most European countries issued travel alerts amid the curfew.

But there was some good news in other areas, Ethiopia successfully launched a rail line linking it to neighboring Djibouti. The economy gained World Bank praise for successes amid the drought.

An Ethiopian was named the new Africa Bureau chief of the International Monetary Fund, the national airliner, Ethiopian, was named the best continental airline for the fifth year in a row. Businesses are bouncing back after a state of emergency brought relative peace.