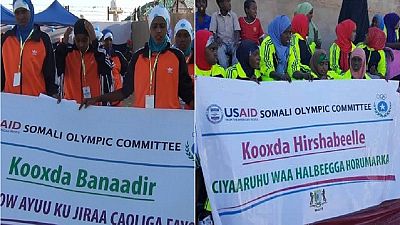 Despite threats and warning, Somalia held its first ever interregional all-girls basketball tournament which ended on Monday with Banaadir region crowned champions.

Hundreds of Somali basketball lovers gathered in the northeastern Somalia town of Garoowe in the Puntland state to watch the finale which saw Banaadir ladies stump the ladies from Hirshabelle state by 66-46.

The tournament was a success after the governor of the host region, Omar Abdullahi Osman, downplayed warnings by the Somali Religious Council which said the tournament violates Islamic law, local media Hiiraan reported.

“We warn that the women basketball violates the Islamic law, culture and its values, and it is a place where women can be easily corrupted. Women should know that they are susceptible to the enemy of Islam, and that youth in particular is the target for those who want to change your Islamic values,” the chairman of the council, Sheikh Bashir Ahmed Salat, was quoted by VOA Somali.

The governor however explained that the games offer Somali women a platform to exhibit their talents as it is done in many Islamic countries.

Basketball is a popular sport in Somalia and has produced laurels for the country including Farhiya Abdi, a Swedish-born Somali professional WNBA player with the Los Angeles Sparks who is a role model for many Somali girls.