Expect more bird flu cases in Europe and in the U.S., OIE says 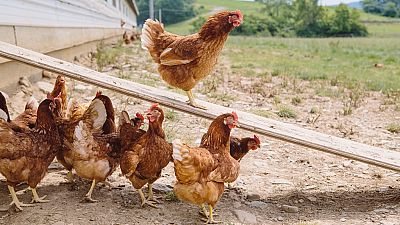 More outbreaks of a severe strain of bird flu in Europe are likely to occur in the next few weeks as wild birds believed to transmit the virus migrate southward, the deputy head of the world animal health body said on Tuesday.

Eight European countries and Israel have found cases of the highly contagious H5N8 strain of bird flu in the past few weeks and some ordered that poultry flocks be kept indoors to avoid the disease spreading.

Most outbreaks involved wild birds but Germany, Hungary and Austria also reported cases in domestic duck and turkey farms where all poultry had to be culled.

“From the level of exposure that we have seen to date I would expected more detections, hopefully only in wild birds but it is certainly possible that the presence of this virus in wild birds will create an opportunity for exposure in domestic poultry,” Stone told Reuters in an interview.

“The OIE is very concerned for the impact on our member countries and particularly those where there has been exposure of domestic poultry and where significant control operations are underway,” he added.

Wild birds can carry the virus without showing symptoms of it and transmit it to poultry through their feathers or feces.

The H5N8 virus has never been detected in humans but led to the culling of millions of farm birds in Asia and Europe in 2014.

In the United States the bird flu crisis last year sent egg prices to all-time highs because of the losses and dozens of countries imposed total or partial bans on U.S. poultry and egg imports.

It would be “no surprise at all” to see new detections in wild birds in North America, Stone said, adding that he hoped the biosecurity framework set up by the U.S. industry and the government would reduce the risk of large-scale outbreaks.

“At this stage we have to take history as our best indicator of what may well play out over the next few months,” Stone said.

Bird flu cannot be transmitted through food. The main risk is of a virus mutating into a form that is transmitted to and between humans, potentially creating a pandemic.

Denmark and the Netherlands have ordered farmers to keep poultry indoors and Germany is considering to do so to protect them from wild birds.

Switzerland said it plans to extend to the entire country precautionary measures to prevent the spread of the virus.

France, which saw its foie gras industry devastated by other strains of the virus earlier this year, has been spared by H5N8 so far but called poultry farmers to increase controls and biosecurity measures.

Since an outbreak of the H5N1 crisis in 2003 when the virus passed on to humans, killing hundreds of them in Asia and Egypt, the OIE’s 180 member countries are bound to report all new occurrences of the disease to the Paris-based organisation.