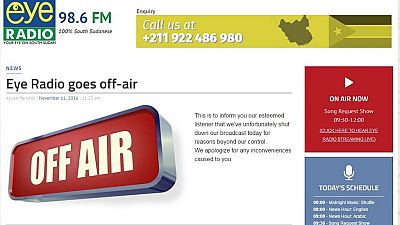 Management of Radio Eye, South Sudan’s first independent radio station, have shut down on Friday ‘for reasons beyond our control.’ But an official confirmed that the station was closed down by national security service officials.

A notice on the station’s website read, ‘‘This is to inform you our esteemed listener that we’ve unfortunately shut down our broadcast today for reasons beyond our control.
We apologize for any inconveniences caused to you.’‘

Special editor Nichola Mandil told the BBC correspondent in the country that security officials moved in on Friday morning (around 08:20 GMT) locked their four studios and also switched off the transmitter.

Even though no official reasons have been given for the closure, chief executive of the station has reportedly been summoned for talks with the director general of the National Security Service.

Eye Radio, formerly known as Sudan Radio Service is an independent popular, locally run nonprofit South Sudanese FM Radio and the leading source of news and information in the country. It managed by nationals but funded by USAid and is part of the Internews network.