'Africans cannot rest so long as Libyans are suffering' - AU 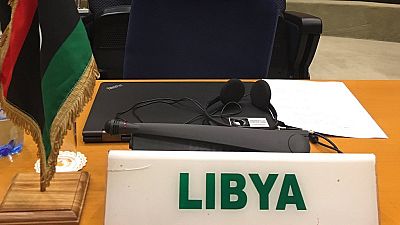 The African Union (AU) on Tuesday met over the security situation in Libya. The north African country descended into crisis after the forced ouster of long serving leader Muammar Al-Gaddafi.

The High Level meeting has been convened by the Chairperson of the African Union, President Idriss Déby Itno of the Republic of Chad, to review the evolution of the situation in Libya and related regional and international efforts aimed at addressing it, and to agree on a way forward.

The members of the AU High Level Committee of Heads of States and Government on the Situation in Libya are Algeria, the Republic of the Congo, Egypt, Mauritania (Chair), Niger, South Africa and Uganda. The AU Representative for Libya is the former President of Tanzania, H.E. Jakaya Kikwete

(The) dire situation in Libya cannot be allowed to continue; we must send a message to people of Libya that tomorrow will be better.

Also present are the AU Commission chairperson, Dr Nkosazana Dlamini-Zuma and the AU’s Commissioner for Peace and Security, Smail Chergui.

Dlamini Zuma – “The situation cannot be allowed to continue”

For her part, Dlamini-Zuma expressed grave concerns about the current insecurity that Libya has been suffering. She said with 2.4 million Libyans needing humanitarian assistance, it was right for the AU and all Africans to rest.

“(The) dire situation in Libya cannot be allowed to continue; we must send a message to people of Libya that tomorrow will be better” the AUC Chair said during her address.

As Africans none of us can rest as long as our sis/bros in #Libya r suffering; 2.4 mln Libyans need humanitarian assistance: Dr.DlaminiZuma pic.twitter.com/es43ohsCIu

African presidents present at the meeting include the following:

Idris Deby: “There is no military solution to Libyan crisis”

Idris Deby as leader of the AU reiterated a stance held by the union that they were not going to back any military interventions in trying to return Libya to normalcy.

According to Deby, it was important that the transition process in the country is respected and pursued.

Niger’s Minister of Foreign Affairs, Ibrahim Yacouba last month affirmed that the “neighbouring countries, particularly his country, are the most affected by the Libyan crisis,” hence the need for a common action to support political resolution of the crisis.

A statement released by Ministers representing Libya’s neighboring countries read in part, “expansion of terrorist groups and their related activities linked to organized crime is a threat to security and stability in the region, and further added that it is necessary to counter them effectively.”

#AU remains convinced that there is no military solution to Libyan crisis; transition process must get back on track: President Idriss Déby pic.twitter.com/M4YzJBLaMl

The United Nations is participating in the High-Level meeting and is represented by the UN Secretary General’s special representative for Libya, Martin Kobler.