Ethiopia to publish details of all arrested individuals within a month 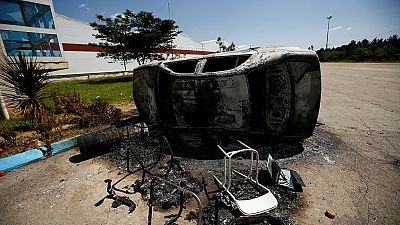 <p>Ethiopia’s Ministry of Defence has revealed that as part of its state of emergency Inquiry Board’s work, it will in the next one month, publish names of all individuals arrested during the period and the reasons for their arrest.</p> <p>‘‘The Inquiry Board is expected to reveal within one month the names of all individuals arrested on account of the state of emergency together with the reasons for their arrest,’‘ the state affiliated <span class="caps">FANA</span> broadcasting corporate reported on Friday.</p> <p>The Command Post had instituted the Inquiry Board to handle issues with respect to the overall conditions of suspects detained under the state of emergency.</p> <p>Secretariat of the Command Post and Minister of Defense, Siraj Fegessa, held discussions with members of the State of Emergency Inquiry Board on the handling of the suspects.</p> <blockquote class="twitter-tweet" data-lang="en"><p lang="en" dir="ltr">Names of all people arrested during <a href="https://twitter.com/hashtag/stateofemergency?src=hash">#stateofemergency</a> in <a href="https://twitter.com/hashtag/Ethiopia?src=hash">#Ethiopia</a> to be revealed in a month- MoD</p>— emmanuel Igunza (@EmmanuelIgunza) <a href="https://twitter.com/EmmanuelIgunza/status/794571604223139840">November 4, 2016</a></blockquote> <script async src="//platform.twitter.com/widgets.js" charset="utf-8"></script> <p>“We have carried out in-depth discussions on ways of handling of the suspects and agreed to work together,” the Minister is reported to have said.</p> <p>Ethiopia declared a state of emergency last month as part of efforts to quell anti-government protests in two main regions of the country. The protests and subsequent security clampdown led to violence that led to attacks on local and foreign business concerns.</p> <p>Ethiopia is currently under a 6-month state of emergency imposed on October 9 to help quell anti-government protests in the Oromo and Amhara regions of the country. The protests started since late last year and extended into this year.</p> <p>As part of the curfew rules, the government has mounted a Command Post that has in the past arrested thousands of people and seized arms supposedly used by anti-government elements.</p> <p>Over 50 people died on October 2 in a stampede at a festival in Bishoftu after police fired teargas and warning shots to disperse protesters at the event.</p> <p>Opposition elements and some rights groups claim a security clampdown led to the death whiles the government insists that the deaths were as a result of a stampede and people drowning. </p> <p>International bodies including the United Nations and the European Union have called on the Ethiopian government to exercise restraint against protesters. The government announced that they had arrested 1000s and recovered hundreds of arms used in the restive regions. </p> <p><strong><span class="caps">READ</span> <span class="caps">MORE</span></strong> <a href="http://www.africanews.com/2016/10/31/ethiopia-says-it-has-released-2000-protest-detainees-after-counseling/" target="_blank">Ethiopia says 2000 protest detainees released after counseling</a></p> <p>The government’s decision to impose the state of emergency has been strongly criticised by opposition activists, who accuse the government of becoming increasingly repressive.  Western diplomats and governments also expressed concern over the curfew.</p> <p>The government blames the violence on “anti-peace forces” and “foreign enemies,” specifically Egypt and Eritrea, even though Egyptian president Al Sisi denied any involvement in the protests.</p>