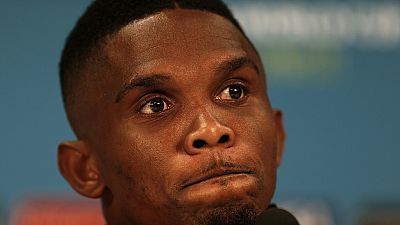 Former Cameroonian international, Samuel Eto’o Fils has sent condolences to the families of people who lost their lives in a train accident between the capital Yaounde and the town of Douala.

The incident happened on Friday at the Eseka station and official reports on Friday evening indicated that over 50 people had lost their lives, over 500 others reportedly injured and 14 others trapped.

The former captain of the national side – the Indomitable Lions, used his official social media handles (facebook, twitter and instagram) to express his sadness and grief with the nation and all those affected.

‘‘It’s with a bruised heart and heavy eyelids that I send you these few words. Words that express my shock following the train accident this day in Cameroon and who bear witness to my deep sympathy to the families of the victims.

‘‘Some people have lost a parent.. others, a brother.. a sister.. a child.. a friend… And in such circumstances, I am aware that the hope appears fragile.

‘‘Yet we must hold on to it at all costs. The hope must indeed be the last to die. Courage to all, people of Cameroon,’‘ his message read.

According to the transport ministry, the casualty figures are as follows: