Attack on a prison holding 'terrorists' in Niger foiled

The Koutoukalé prison which is 50 kilometers northwest of Niamey was attacked early Monday morning by armed men and repelled by security forces.

The Nigerien Interior Minister Mohamed Bazoum announced on social media that the prison that holds terrorists was attacked at 03:00 GMT.

“The Koutoukalé prison which holds many terrorists, including Malians, was attacked at 4:00 this morning. The enemy was repulsed leaving some dead wearing explosive belts,” the minister said.

The attack comes after the kidnapping of an American aid on Friday who is suspected to have been taken to neighboring Mali.

“Heavily armed terrorists attacked this high security prison. They could not enter the prison because of the shooting by soldiers who were guarding it,” a security source told AFP.

The high security prison is considered the safest in the country.

In October 30, 2014, an armed group attacked the Ouallam prison, 100 km north of Niamey, and freed inmates. In June 2013, the Niamey prison was also attacked and at least two prison guards were killed and three others wounding. 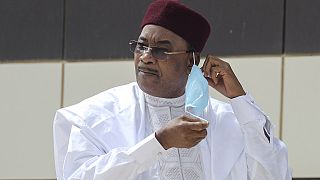