Besigye 'kidnapped' on return to Uganda, police says it was 'preventive arrest' 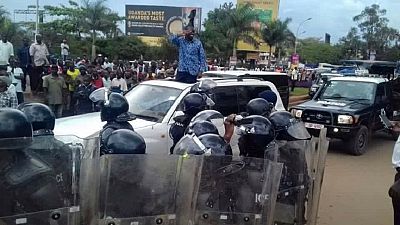 Ugandan opposition leader, Kizza Besigye, returned to the country from a European tour on Monday but says he was ‘kidnapped’ on arrival by security personnel on the stairs of the flight that he arrived with.

‘‘They held my trousers and they lifted me off the plane. I still don’t have my luggage. I have my passport and it’s not stamped. I haven’t returned officially. I was kidnapped,’‘ Besigye said.

Am back!! Kidnapped from the aeroplane at Entebbe airport by goons using Civil Aviation Authority vehicle &uniforms. Now barricaded at home. pic.twitter.com/cdRgqSzCeE

Leaders of his party, the Forum for Democratic Change (FDC) had thronged the Entebbe airport to receive Besigye but they were prevented from accessing the VIP section of the airport.

Members of his party were also gathered at the airport to receive him. He was however whisked away by security detail and sent straight to his Kasangati residence. The action of the police was later explained as ‘Preventive Arrest,’ – a measure to avert the disruption of public peace that his followers were likely to cause.

He addressed a cross section of his party faithful and the press at his residence, stating that he was back to continue the defiance campaign. He also insisted that he was winner of the February 2016 polls.

On Tuesday evening, he posted a picture of metal bars placed at his home by police to ensure he does not leave his home. ‘‘This is a what has been placed outside our home’s gate by the regime police! It isn’t the first time they violate my home with impunity,’‘ his tweet read.

This is a what has been placed outside our home's gate by the regime police! It isn't the first time they violate my home with impunity. pic.twitter.com/NTGt3LSTlX

Besigye was granted bail on treason charges before a court gave him permission to travel out of the country. On his return however, he has expressed the desire for the treason trial to be pursued by the state.

I've just been forcefully returned home after being blocked at clock tower. Police is dealing with a political problem not a security one! pic.twitter.com/e1KLgrYORU