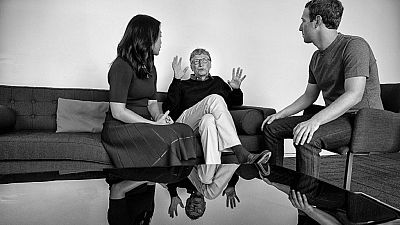 <p>Facebook Chief Executive Officer, Mark Zuckerberg and his paediatrician wife, Priscilla Chan, have labeled the world’s richest man, Bill Gates, as a tech and philanthropic role model and mentor.</p> <p>Gates, joined Mark and Priscilla on Wednesday during the official announcement of their Chan Zuckerberg Initiative (<span class="caps">CZI</span>), which has set aside some $3 billion dollars to tackle children’s diseases.</p> <p>On his official facebook page, Mark expressed appreciation to Gates for being part of their initiative.</p> <p>‘‘Bill and Melinda’s work on eradicating diseases like polio and malaria is a big reason we’re so optimistic that together we can cure all diseases in our children’s lifetime. </p> <p>“Bill, thank you for being a role model and mentor — both in technology and philanthropy — and for continuing to teach us so much,’‘ his post read.</p> <p><strong><span style="color:green;"><span class="caps">READ</span> <span class="caps">MORE</span></span></strong> <a href="http://www.africanews.com/2016/09/21/facebook-ceo-and-wife-donate-3bn-to-cure-diseases-bill-gates-on-board/" target="_blank">Facebook <span class="caps">CEO</span> and wife donate $3bn to cure diseases, Bill Gates on board</a></p> <p>According to Mark, the roadmap for the program, which includes three parts:</p> <p>1. Bring scientists and engineers together<br /> 2. Build tools and technology<br /> 3. Grow the movement to fund science</p> <p>Gates for his part spoke about how ambitious the initiative was, “Thank you Mark, it’s an honour to join you all after this incredible milestone. The Chan Zuckerberg initiative is already doing some very promising work in terms of improving education for all students (and so) that is a really thrilling thing.</p> <p>And it is amazing that today they are taking on another bold challenge, this idea of curing and preventing all diseases by the end of the century. That’s very bold very ambitious, and I can’t think of a better partnership to take it on,” he said.</p> <p>The Bill and Melinda Gates Foundation is one of the biggest worldwide. According to their website, they work with partner organizations to help solve the world’s most challenging problems.</p> <p>‘‘But some of our best resources in the fight against extreme poverty, disease, and educational inequity are the individuals who take action in their own communities. </p> <p>Our Global Citizen and Foundation Cares programs help communities and organizations join in our effort to improve the lives of people around the world,’‘ they added.</p>

Bill, thank you for being a role model and mentor -- both in technology and philanthropy -- and for continuing to teach us so much.