Facebook CEO and wife donate $3bn to cure diseases, Bill Gates on board 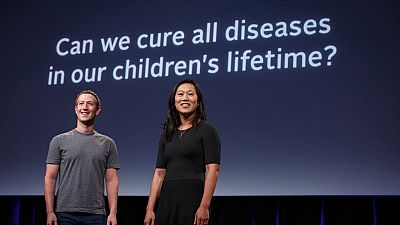 <p>Facebook Chief Executive Officer (<span class="caps">CEO</span>) Mark Zuckerberg and his wife Priscilla Chan have pledged over $3 billion towards a plan to ‘‘cure, prevent or manage all disease within our children’s lifetime.’‘</p> <p>At the tail end of the much anticipated event that announced the donation, Zuckerberg introduced the world’s richest man, Bill Gates as a partner to their initiative.</p> <p>“Thank you Mark, it’s an honour to join you all after this incredible milestone. The Chan Zuckerberg initiative is already doing some very promising work in terms of improving education for all students (and so) that is a really thrilling thing.</p> <p>And it is amazing that today they are taking on another bold challenge, this idea of curing and preventing all diseases by the end of the century. That’s very bold very ambitious, and I can’t think of a better partnership to take it on,” Bill Gates said.</p> <p><strong><span style="color:blue;"><span class="caps">READ</span> <span class="caps">MORE</span></span></strong> <a href="http://www.africanews.com/2016/09/22/zuckerberg-praises-role-model-and-mentor-bill-gates/" target="_blank">Zuckerberg praises role model and mentor, Bill Gates</a></p> <iframe src="https://www.facebook.com/plugins/video.php?href=https%3A%2F%2Fwww.facebook.com%2Fzuck%2Fvideos%2F10103120865133051%2F&show_text=0&width=560" width="560" height="315" style="border:none;overflow:hidden" scrolling="no" frameborder="0" allowTransparency="true" allowFullScreen="true"></iframe> <p>Their donation is under the auspices of the Chan Zuckerberg Initiative (<span class="caps">CZI</span>). The amount would be under a new program called Chan Zuckerberg Science and it focuses on the delivery of healthcare solutions.</p> <p>The money will bring together teams of scientists and engineers “to build new tools for the scientific community” Priscilla Chan said on stage at an event in San Francisco on Wednesday night.</p> <p>Part of that money will go to a $600 million investment in Biohub, which will unite researchers from three institutions, Stanford, Berkeley, and the University of California, San Francisco (<span class="caps">UCSF</span>) with world-class engineers to find new ways to treat disease. </p> <p>Biohub will be led by UCSF’s Joe DeRisi and Stanford Stephen Quake, known for the expertise in biophysics and bioengineering. Biohub will be located in San Francisco’s Mission Bay district.</p> <p>“We’ll be investing in basic science research with the goal of curing disease. As a pediatrician I’ve worked with families at the most difficult moments of their lives,” Chan said, shedding tears on stage as she recounted people hearing a loved one had cancer. </p> <p>Mark Zuckerberg came out on stage to lay out the roadmap for the program, which includes three parts:</p> <p>1. Bring scientists and engineers together<br /> 2. Build tools and technology<br /> 3. Grow the movement to fund science</p> <p>The <span class="caps">CZI</span> was first announced in December last year alongside the birth of the couple’s daughter Max. Structured as a limited liability company (<span class="caps">LLC</span>), Mark will donate 99% of his Facebook shares, or about $45 billion, to the organization during his lifetime. </p> <p>By setting up the CZI as an <span class="caps">LLC</span> instead of a traditional charity, Zuckerberg still controls his shares, and can make investments in for-profit companies, political campaigns, and policy lobbying as well as non-profits. </p> <p>The group’s goal is to advance human potential and equality.</p>

We’ll be investing in basic science research with the goal of curing disease. As a pediatrician I’ve worked with families at the most difficult moments of their lives