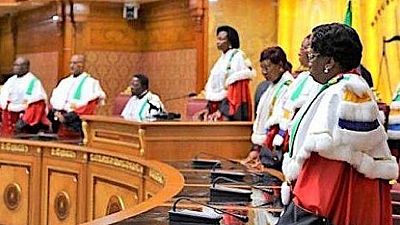 Gabon’s Constitutional Court does not see the need for observers as it prepares to deliver a verdict on the contentious presidential elections of August 27 latest by this Friday, September 23.

The court has thus cancelled the African Union’s (AU) proposed observer mission to the country according to a representative of the AU’s Peace and Security Department.

“The judges of the Constitutional Court give their verdict on behalf of the people. They take an oath. They are not legal experts of the African Union,” said an official of the court as a reason for the denial of access for the AU’s participation in the ongoing process.

The AU had hinted last week that they were going to send observers to the central African country to take part in the crucial court hearing over whether incumbent Ali Bongo was validly elected or that there is the need for a recount of votes.

This was after the continental political bloc had sent notes to Libreville to explain the work of its lawyers, but their mission was not granted access, “the Court does not want our team,” an AU representative is quoted to have said.

The main opposition led by former AU Chairperson, Jean Ping, has demanded the establishment of a commission of experts to monitor the recount of votes of the Haut-Ogooué province where Ali Bongo received 95% of votes.

Jean-Rémy Bantsantsa, a lawyer for Jean Ping, said that the important thing is that lawyers representing both parties can follow the recount of Haut Ogooué, where they believe votes were rigged to allow Bongo emerge winner.

On the other hand, Francis Nkea, one of the lawyers of Ali Bongo, said he was content with the process. According to him, the Court is the doctor of the election. It must disinfect everything that pollutes and cancel irregularities across board.