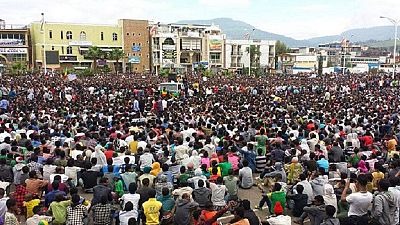 The African Union (AU) has finally spoken on the protests in Ethiopia saying it was following the situation with great concern. The AU also called for restraint on the part of parties involved.

The continental body issued a statement from its chairperson, Dr. Nkosazana Dlamini Zuma, stating that the AU was ‘‘following the evolving socio-political situation over the last few months in the Federal Democratic Republic of Ethiopia with great concern.’‘

Fresh protests broke out in the East African nation in late July with tens of thousands of protesters marching in the Amhara region demanding regime change in the country. The social media instigated protest was however disrupted by security officials.

The Amhara protests came months after the Oromia protests in the country’s south late last year extending into the early part of this year.

After the late July protest in Amhara, several others were staged in parts of the country including the capital Addis Ababa, where the AU has its headquarters. Those protests too were largely clamped down by security officials.

Protesters resorted to using social shutdowns as a sign of protest, with media reports indicating that streets were deserted in areas where the protesters targeted.

But according to the AU chair, there was the need to embrace dialogue as the best way to find peaceful and lasting solution to the social, political and the economic issues that were underlying the protests.

‘‘The socio-political situation in Ethiopia has led to a number of reported deaths, temporary disruptions of public and private businesses, as well as occasional interruption of telecommunication services,’‘ the statement said.

According to human rights groups, over 200 people were killed in the protests. Several bodies including the United Nations and the European Union called for restraint on the part of security forces.

‘‘The AU Commission Chairperson reiterates the AU’s support for the respect of the rule of law, and peaceful demonstrations which are critical tenets in the upholding principles and culture democracy,’‘ the statement concluded.