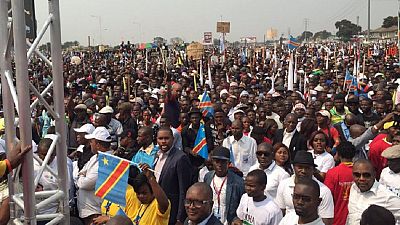 Thousands of opposition supporters flocked to central Kinshasa for a rally organised by popular opposition leader of the Democratic Republic of Congo, Etienne Tshisekedi, the first after his return from Belgium on Wednesday.

The Union for Democracy and Social Progress (UDPS) party leader returned to the country after a two-year absence for medical treatment. A huge crowd gathered at the airport on his arrival chanting and singing praises to a man the opposition is expecting to replace President Joseph Kabila.

Supporters of the 83-year-old veteran politician were blowing horns and chanting anti-government slogans at his residence on Sunday before they escorted him to the grounds of the rally, AFP reports.

AFP adds that people carried banners that read: “Change is now”; “No dialogue without release of political and opinion prisoners.” “The only leader in DRC is Tshisekedi , despite his age”.

Etienne Tshisekedi is very popular in the DRC as he opposed the dictatorship of Mobutu Sese Seko from 1965 to 1997 and then fought the regime of Laurent Kabila, the current head of state’s father.

He came second in the 2011 presidential election and had rejected the results.

Tshisekedi is expected to announce the participation of the opposition in the national dialogue to allow for a peaceful election.