Three Nigerians and one Indonesian have been executed by firing squad for drug crimes at the Nusankambangan prison island.

The Indonesian government has promised 10 other executions in a yet to be announced date among whom are three other Nigerians and a Zimbabwean.

The Secretary-General urges President Joko Widodo to consider declaring a moratorium on the use of the death penalty in Indonesia and to move towards its abolition.

Their families had been given the opportunity to visit the victims shortly before the execution on Thursday.

The Indonesian government went ahead with the executions despite a warning from the United Nations urging Indonesia to review its death penalty laws.

“Drug crimes are generally not considered to meet this threshold. The Secretary-General urges President Joko Widodo to consider declaring a moratorium on the use of the death penalty in Indonesia and to move towards its abolition,” UN spokesman, Farhan Haq said on Wednesday.

“The capital punishment is not against the regime of international law. For Indonesia, the death penalty is a positive law that is still effective here, and it’s not against human rights under the context of the 1945 constitution, “ Foreign Ministry spokesman, Armanatha Nasir said during a press conference.

Groups of protesters staged demonstrations as they watched the bodies of those executed being transported for burial.

Some of the protesters were arrested and detained at the Cilacap ferry port.

The protesters were calling on the government to focus on fighting corruption and eliminating poverty.

“When the president or the government argue that these people killed the younger generation we asked them numerous time where is the data,” Indonesian rights activist, Gadis Avira told reporters.

Indonesia is one of the biggest markets for narcotics in South east Asia.

The government has declared a drug emergency and has vowed to continue with executions in efforts to quickly eliminate drug trafficking and its impact on youths. 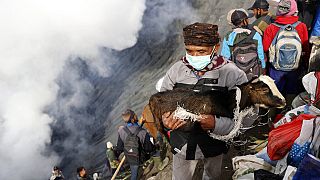