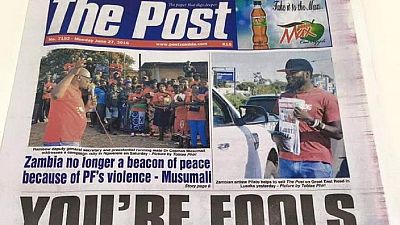 A Zambian lawmaker, Miles Sampa has alleged that the ruling Patritic Front (PF) party, owes The Post newspaper millions of kwacha in political advertisements debts since 2006.

Sampa made the disclosure whiles addressing journalists at the opposition United Party for National Development’s secretariat, he wondered why the PF government was using ZRA (Zambia Revenue Authority) to harass The Post over disputed tax, even though high ranking officials know of their indebtedness to the newspaper.

“I know the sacrifice that The Post and Fred M’membe went through to help us reach out to the voters. I was the agent between president Sata and The Post, sometimes we would take adverts there worth a lot of money and we have not paid since 2006,” Sampa said.

I was the agent between president Sata and The Post, sometimes we would take adverts there worth a lot of money and we have not paid since 2006.

According to him, The Post stood by the former leader of the party, the late Michael Sata, at a time when others like the Daily Mail, Times of Zambia, the Zambia National Broadcaster were not covering the PF’s activities in 2011, even when they had paid them.

Officials of the Zambia Revenue Authority (ZRA), according to the Post, under instructions from State House and accompanied by security officers went to the offices of the newspaper demanding disputed tax arrears of about Sh 68 million ($6.1 million)

Local media reports that despite explanations by the paper’s head of finance that the said amounts had been settled, a ZRA officer responded that they had not received it hence the need to enforce the distress warrant.

The campaign offices of the opposition UDNP was also raided over the weekend with the government apparatus citing the presence of offensive weapons, they reportedly destroyed materials and arrested 7 people.

President Edgar Lungu heads into the August polls with nine other contenders, even though the race is seen to be fought between the incumbent and the main opposition’s Hakainde Hichilema who came in second in the last elections.

Lungu who has been in power for a year is seeking to rule the Southern African country for the next five years. The 59-year-old leader came into power after winning a ballot triggered by the death of his predecessor, Michael Sata, in October 2014.

Reports indicate that Lungu is basing on his re-election strategy on his achievements during his tenure. Meanwhile, the country’s electoral commission has threatened to bar campaigning ahead of the elections due to growing cases of violence between supporters of the ruling Patriotic Front and the main opposition United Party for National Development.