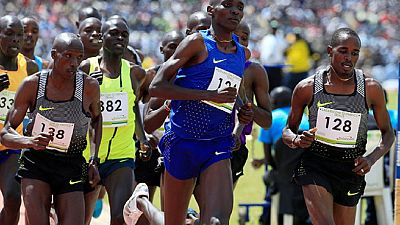 Kenya on Thursday officially booked its ticket to the Rio Olympic games with the selection of a 52-men strong team.

Reigning Olympic title-holders in the steeplechase including three-time world champion in the 1,500 metres Asbel Kiprop and World 10 000m Champion Vivian Cheruiyot made it to the list of those who will be holding it down for the East African country at the games taking place in August.

Kiprop, who clocked 3 minutes and 38.21 seconds to win his race during the national trials on Friday couldn’t be more happier to fly his country’s flag.

“I am excited, I am happy having won this in Eldoret and having secured my title to represent Kenya in to the Olympic games,” he said.

Cheruiyot hinted at the great challenge ahead of her in Rio, though she remained optimistic and promised to train hard for the competition.

“My shape is coming up slowly and it is better than last year according to me, I am seeing something which is going to be good in my life this year because I am going to do both the 5 and 10 (5,000 and 10,000 meters race) and the first one will be 10,000 on August 12th. So this one month which is ahead of me I am going to do a lot of training and I will be capable of doing something in Rio.”

Ezekiel Kemboi in the 3,000 metres and David Rudisha in the 800 metres also received big acclaims to represent the county at the global stage.

The team is expected to report to camp on Monday. Track and field athletes will meet at the Dr. Kipchoge Keino High Performance Training Centre and runners in Kapsabet.