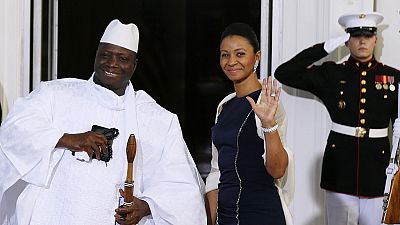 The first lady of the Islamic Republic of Gambia, Zineb Jammeh, has spoken in very hard terms against the practice of child marriages in the country.

‘‘Eliminating child marriages should be our priority, to allow young girls to develop and contribute to development. We can’t afford to allow child marriage to hold back our beautiful girls any longer,’‘ she said.

We can't afford to allow child marriage to hold back our beautiful girls any longer. – ZinebJammeh #EndChildMarriage

She was speaking at the launch of the #EndChildMarriage campaign which kicked off in the country on Thursday under the auspices of the United Nations Children Emergency Fund (UNICEF) in the Gambia.

She also called on traditional authorities in the country to play a role in combating the incidence of children being given out in marriage to older suitors, thereby affecting their development at the health, academic and social levels.

She further disclosed that her foundation would continue work with UNICEF to ensure children enjoy growing in a safe environment.

The First Lady of The Islamic Republic of The Gambia ZinebJammeh has officially launched the #EndChildMarriage campaign in the country.

According to the AU Goodwill Ambassador against forced marriages, Nyaradzayi, ‘‘the statistics in West Africa are alarming. One child is one too many. Let us mobilize at ECOWAS level to end child marriage.’‘

She further reiterated that even though sensitization on the topic was easy, monitoring and combating the phenomenon was difficult, adding that there was the need to support legal and policy actions, to raise public awareness and build social movement against the practice.