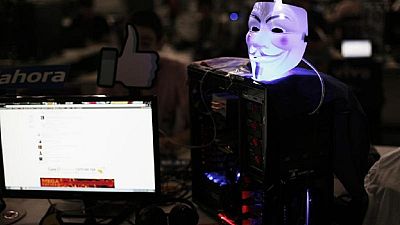 The Anonymous Africa group earlier today hacked the official websites of two political parties describing them as racist in nature.

South Africa’s opposition Economic Freedom Fighters (EFF) and Zimbabwe’s ruling ZANU-PF had their websites pulled down by the group. In the case of the EFF, the ‘attack’ was in response to a challenge thrown by a member of the party.

‘‘While teaching racist EFF trolls a lesson we have also decided to knock on their Godfathers door as well. http://www.zanupf.org.zw/ is down,’‘ the group tweeted on Tuesday to confirm having hacked the website to Robert Mugabe’s party.

https://t.co/WD25YpWstD is #TangoDown – For being racist trolls. Do not #VoteEF

Anonymous Africa in the recent past hacked the website of South African Broadcasting Corporation (SABC) after the public broadcaster said it was not going to show videos of protests, the group accused SABC of censorship.

The EFF have very strong views on black empowerment in South Africa usually using very strong language while ZANU-PF and Mugabe have the long standing land reclamation issues that led to the sacking of white farmers still hanging around its neck.

African governments have been subjected to website hacks by anonymous groups, the Angolan and Kenyan governments in the recent past have suffered cyber attacks because of human rights situations in their respective countries.