In case you don't know who Stephen Keshi is ... 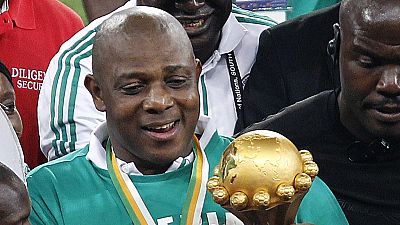 Stephen Keshi started playing professional football in 1979 in Lagos joggling from one club to the other before he got his first break outside Africa’s largest economy.

He moved to Abidjan in 1985 to play in their premier league before getting his big break in 1986. He was spotted and signed by Belgian football club Sporting Lokeren in 1986, to ply his trade in Europe.

A year after his stint with Lokeren, Keshi was signed by Belgian premier league side Anderlecht in 1987. He appeared 99 times for the club scoring 18 goals till he left to Strasbourg in 1991.

Keshi continued his play with other teams in Belgium till 1995 when he moved to California in the United States of America and played for smaller teams. He used that opportunity to train as a coach in 1996.

This is how Stephen Keshi will be remembered – https://t.co/ejUiaxqZb5 pic.twitter.com/1uqxOFg0eZ

Stephen Keshi finally moved to Malaysia in 1997 to play for second division side Perlis, before ending his active footballing career as a player in 1998.

Stephen Keshi appeared 64 times for the Nigerian national team, Super Eagles scoring 9 goals as a central defender. He won the Africa Cup of Nations as captain of the team in 1994.

RIP to Nigerian great, Stephen Keshi. One of only 2 people to win the Africa Cup of Nations as a player and coach. pic.twitter.com/JrTSP1pSsm

During this time, Nigeria reached number 5 on the FIFA world ranking, highest for an African team.

After his coaching training in 1996 in the USA, Stephen Keshi got the opportunity to lead Nigeria’s Junior Eagles at the 2001 African Youth Championship.

He started his major coaching career with Togo in 2004 helping them qualify for the first time to the World Cup in Germany in 2006.

He was however replaced with Otto Pfister at the World Cup and then brought back after poor performance and controversies surrounding the Togolese team in 2007.

Keshi then coached Mali in 2008 and was sacked in 2010 after poor performance resulting in the team’s failure to progress from the group stage at the Africa Cup of Nations in Angola.

Keshi finally got the opportunity to coach his home country Nigeria in 2011 helping them qualify for the AFCON in 2013 which they won. He resigned the following day and later changed his mind.

Thank you for the great memories Stephen Keshi. Only #SuperEagle to win the Nation's cup as a player & manager. #RIP pic.twitter.com/qYAhrrkMku

Nigeria also qualified for the 2014 World Cup under his management. The team progressed to the Round of 16 when they were kicked out only for Keshi to resign again. He returned after he got his contract renewed by the Nigeria Football Federation (NFF).

After helping Togo qualify for the 2006 World Cup in Germany, Keshi was replaced with Otto Pfister who couldn’t carry the team on to the finish.

Stephen Keshi was also sacked as Mali coach in 2010 after recording poor results which caused the team to exit the group stage of the Africa Cup of Nations in Angola.

Keshi had a terrible footballing moment in 2014 when Nigeria, defending champions, failed to win a game in the qualification matches for the Africa Cup of Nations in Equatorial Guinea.

He was under immense pressure from the federation and fans but he chose not to resign for the love of his country.

In 2015, Keshi was sacked as Super Eagles coach for poor results which led to the team’s failure as defending champions to qualify for the Africa Cup of Nations in Equatorial Guinea.

Stephen Keshi is remembered for some inspirational quotes he made in his career. Some memorable ones are:

“People don’t have to believe in you for you to succeed. Just work hard. When you succeed, they will believe.”

“Be kind for everyone you meet is fighting a battle.”

Stephen Keshi is one of two Africans to win the Africa Cup of Nations as a player and as coach of a national team. He was the captain of the Super Eagles winning team in 1994 and the coach of the 2013 winning team in South Africa.

Thank you for all the memories, Coach Stephen Keshi. You will be missed. Rest in Peace. #RIPKeshi #RIPBigBoss pic.twitter.com/gfwxdHP4ww

One of Nigeria’s all-time great footballers Stephen Keshi has died at the age of 54. Rest in peace, Keshi. pic.twitter.com/P9FUXrI8Cx

He was also the first African coach to successfully qualify two African countries, Nigeria and Togo, to the World Cup finals. He also helped Nigeria in 2013 to become the first country to get an AFCON trophy and qualify for the World Cup.

He was awarded Africa Coach of the Year 2013 by CAF after Nigeria’s sterling performance and victory at the AFCON 2013.

Stephen Keshi was a family man with four children. He was married to his wife Kate Keshi for 33 years until she passed away on December 10, 2015 after a three-year battle with cancer.

Stephen Keshi died in the early hours of Wednesday, June 8, 2016 in Nigeria.

His family said he died of cardiac arrest.