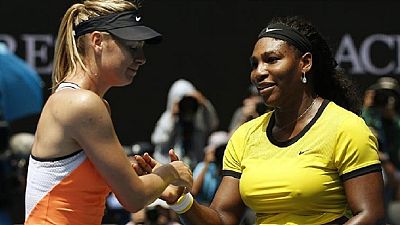 US tennis queen, Serena William, may have just lost the French Open to her Spanish opponent Garbine Muguruzu but she has something else to celebrate as she was announced as the world’s highest-paid female athlete in the last one year.

Forbes magazine announced on Monday that Serena Williams had overtaken Russian Maria Sharapova as the highest-paid female athlete raking in some $28.9 million in prize money and endorsements over the year.

The world No. 1 won three Grand Slams in 2015 (the Australian Open, the French Open and Wimbledon), she also reached the final of the year’s first two Slam events and added a major endorsement deal with JP Morgan Chase.

Williams, 34, was chasing a record equalling 22nd Grand Slam title, same as Steffi Graff but lost to Muguruzu. She has dominated her sport for the past fifteen years. She won her second Grand Slam in 2002 and has added 19 more since then.

Her career prize money of $77.6 million is more than twice as much as any other female athlete.

Sharapova who maintained her highest paid tag in the last 11 years despite not being as successful on the pitch as Serena, she lost lucrative endorsement deals with Nike, American Express, Porsche and TAG Heuer due to her recent doping scandal.

She fell to second with $21.9 million, down nearly $8 million from last year.