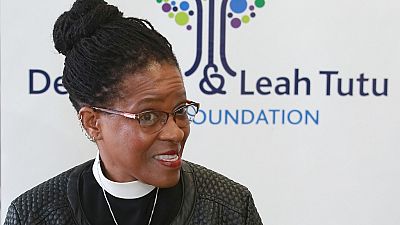 The daughter of Nobel Peace Prize winner Desmond Tutu has been forced to abandon her priesthood in the South African Anglican Church after she married a woman.

Reverend Mpho Tutu-van Furth, who is in her fifties, told AFP that according to the canon law of the Anglican Church in South Africa, marriage is a union between a man and a woman so she decided to quit.

It is ironic that our similarity, the fact that we are both women, is the cause of our pain today, whereas in the past the differences were an instrument of division.

“After my marriage, we told the Bishop of Saldanha Bay (in eastern South Africa) to revoke my license. I gave it up rather than impose it on myself,” she said.

South Africa has legalized gay marriage since 2006 and her father, former archbishop of the church, Desmond Tutu, is well known for his support of gay marriage.

Mpho Tutu-van Furth told AFP that her father, who was active during the apartheid days, was “sad but not surprised by the news”.

“It is ironic that our similarity, the fact that we are both women, is the cause of our pain today, whereas in the past the differences were an instrument of division,” she said in reference to the South African apartheid regime, which officially ended in 1994.

An official of the Anglican Church in the Saldanha Diocese, Bruce Jenneker, told AFP that they received the licence of Mpho Tutu-van Furth with sadness. “It’s a shame that it happened,” he added.

Mpho Tutu and her wife Marceline van Furth, a professor in pediatric infections based in Amsterdam, both divorced from previous marriages with a child each, were officially married in December in the Netherlands. They organized a second ceremony in May near Cape Town which 84-year-old Desmond Tutu attended despite poor health.

They are currently on their honeymoon on the Indonesian island of Bali.