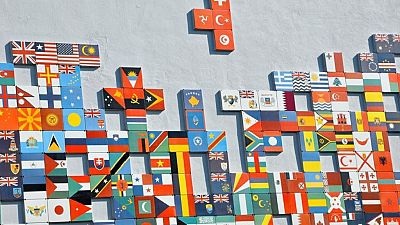 It is one of the most successful, and most played, video games of all time, a simple concept that has proved to be of near-universal appeal and which has grown beyond the wildest dreams of its inventor.

And now Tetris is even bigger, not to say larger than life. Fans can now play the game on a 15-storey building at the University of Kiel campus in northern Germany.

Four students dedicated a year of their bachelor’s degrees to creating the display.

I also wanted to see what me and the team can do. What have we learnt from our studies? And that is what we came up with.

Project coordinator Jonas Lutz, who initially came up with the idea, explains:

“What we have done is we have this high-rise building with 392 windows. We put a light in each of the windows. They are all connected over a network and the internet to a computer that controls each light – making a 1700 inch display. Then, when you have this display you have to decide what to do with it. We decided to start by playing Tetris, so that’s what we have done.”

The total budget for the project, called “Project Lighthouse”, was 30,000 euros, and it was funded entirely by donations.

A group of college students turned a building into a giant Tetris board- Four students at the University of Kiel https://t.co/r4F001M5ak

The LED panels are each 70 centimetres long. Each contains 144 LED lights, meaning that a total of 56,448 LED lights are used in the installation.

According to the University, the games use 56.5 kilowatt-hours if played for four hours per night, at a cost of 11.25 euros.

Most of the budget went on the hardware, the LED light panels and the 196 network communication boxes that connect the lights to the software.

Lutz, who is studying for a bachelor’s degree in business informatics, has worked unpaid for a year on the project, for five credits towards his studies. So, why did he do it?

“I came up with the project mostly for fun. But I also wanted to see what me and the team can do. What have we learnt from our studies? And that is what we came up with,” said the co-creator of the game.

The resolution is not great compared to most smartphones, but it is certainly enough for Tetris.

Two other games have been added: Snake and Pong, and the students are working on adding more.

At the moment Lutz and his team just turn the game on for special occasions such as orientation days, university parties and when international guests come to visit.