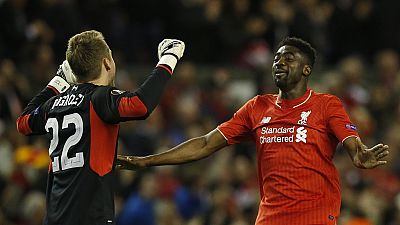 Liverpool overturned a one-goal first leg deficit, thrashing Villarreal 3-0 at Anfield to reach the Europa League final, which will be their first European final since 2007.

Bruno Soriano’s early own goal seven minutes into the game gave the Reds the lead, before Daniel Sturridge and Adam Lallana struck in the second half to secure a slot in the final.

The Reds thoroughly dominated Villarreal, who appeared subdued by the raucous atmosphere and an early onslaught at Anfield. The Spaniards’ demise took a steep dip in the 71st minute after Victor Ruizwas sent off following a second booking.

Liverpool now meet Sevilla on May 18 in the final at St-Jakob Park in Basel Switzerland.

Sevilla who are two-time defending champions of the competition beat Shakhtar Donetsk 3-1 to win their semi-final 5-3 on aggregate.

The winner of the competition is guaranteed entry into next season’s Champions League.