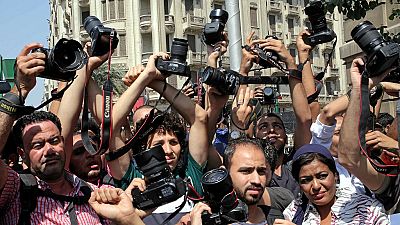 Egyptian police stormed the headquarters of the country’s journalists union on Sunday and arrested two members for what it termed as incitement to protest.

The arrests came as the country marked International Workers’ Day and according to media reports, the raid on the office was at the request of the country’s prosecutor general, Egypt’s highest judicial body.

The journalists arrested were Amr Badr and Mahmoud el-Saqqa, both of the opposition news site.

The raid by security forces, whose blatant barbarism and aggression on the dignity of the press, journalists and their syndicate, has surprised the journalistic community.

However, reports are conflicting as to the scale of the raid, with police denying they entered the building by force, saying only eight officers were involved.

Following the raid, dozens of journalists demonstrated outside the building chanting and demanding for media freedom.

Yahya Kallash, head of the journalists’ union on Monday called for the Interior Minister Magdy Abdel Ghaffar to resign after what he said was an “unconstitutional and illegal.”

He also said that the union will hold an emergency meeting on Wednesday to coincide with the World Press Freedom Day.

“The raid by security forces, whose blatant barbarism and aggression on the dignity of the press, journalists and their syndicate, has surprised the journalistic community and the Egyptian people,” he added.

Egyptian authorities have been accused of arbitrary arrests and crackdown on those perceived as opposing the ruling regime.