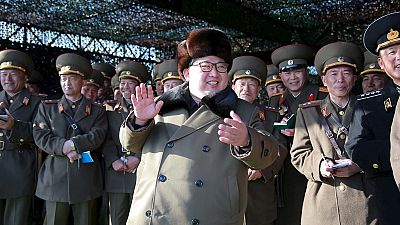 North Korea has stepped up its nuclear programme as it claims to have miniaturized nuclear warheads.

According to state run media, Kim wants to assess the power of newly developed nuclear warheads. This is despite the country drawing international condemnation since is fourth test in January.

The government is maintaining full readiness to immediately respond to any provocations by North Korea.

On Thursday, the country shot two shot-range ballistic missiles into the sea. This revelation comes days after it was established that the nation is developing long-range and intercontinental missiles.

“This is a rash behavior that doesn’t know the time of day. This proves why the international sanctions on North Korea are necessary…The government is maintaining full readiness to immediately respond to any provocations by North Korea,” Jeong Joon-hee, South Korea’s unification ministry spokesman, said at a press briefing.

Since January, tensions in the Korean Peninsula have risen following the launch of a nuclear test and a long-range rocket, clear violations to United Nations (UN) resolutions.

Recently, the UN unanimously adopted a resolution to impose new sanctions and tighten existing measures against the North.

The UN Secretary-General said in statement: “This firm response by the Security Council should put an end to the cycle of provocation and lead to the resumption of dialogue in accordance with the unified view of the international community.”