South Africa: Conservationists use bees to save marula fruits from destruction 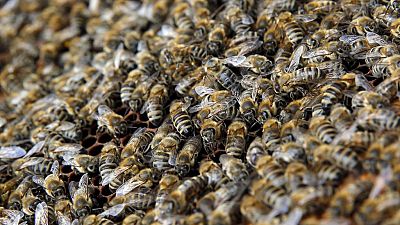 Elephants enjoy a good marula fruit as much as anyone.

But at one of Africa’s largest game parks – the Kruger National Park in South Africa, their love of the fruit is becoming something of a problem, as they risk destroying the trees, which provide an additional source of income to the local community.

Non-Governmental-Organization Elephants Alive has thus initiated a project to keep the elephants away from the fruit.

Obviously the fruits are eaten, they're used to brew traditional beer, people also use it to make jam, and the edible kernel is also highly valued

“The elephants really, really enjoy the fruit of marulas. I’ve seen a bull guarding a tree and chasing anything that happened to come past that tree away from the tree. Marulas are their preferred, one of their preferred species that they browse on. So, they enjoy eating the bark, new leaves and obviously the fruit,” said Michelle Henley, Co-Founder of Elephants Alive:

In order to protect the trees, the team is experimenting with beehives. It’s not such a well-known fact, but elephants don’t like the buzzing sound or being stung by bees. The team has built just over 100 beehives and hung them along a fence of trees to see if they keep the elephants at bay.

The threat of real bees seems to help deter elephants, and as an added bonus, the hives produce honey, wax and a special medicinal resin collected by bees.

“Marula is what we would refer to as a cultural keystone species. In the local culture it has high value because of the wide range of uses that people get from the tree. Obviously the fruits are eaten, they’re used to brew traditional beer, people also use it to make jam, and the edible kernel is also highly valued. And then there are a whole range of medicinal uses of the plant, it’s also valuable for shade,” said Wayne Twine, an Associate Professor at the School of Animal, Plant and Environmental Sciences at the University of the Witwatersrand.

Marula tree experiments are already being tested by farmers in several African countries, including Mozambique, Tanzania, Uganda and Kenya, and are also being tested as pilot projects in some Asian countries