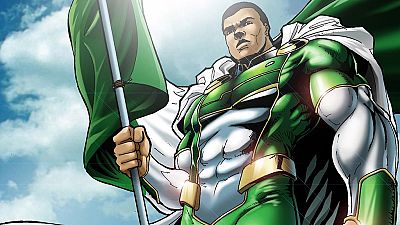 The business of bringing up children to love and choose between good and evil, truth, justice and righteousness lies to a certain degree on comic books and generally what they read.

The business is lucrative the world over, and one cannot mention comic books without citing Marvel and DC Comics.

In Africa, and specifically in Nigeria now, there is Comic Republic.

I enjoy reading both African and foreign comic books but I think I enjoy African more.

According to him, it is a billion dollar industry but it is only noble in Nigeria as parents rarely introduce their children to that world.

“The top grossing movies in our cinemas are of comic heroes. Nigerians are increasingly watching series and television programmes that have comic individuals in them,” said Martin.

His company created an ensemble known as ‘African Avengers’ who fight for a better Nigeria. They have also created female superheroes like Ireti – a mighty warrior who is an expert in battle, conquering kingdoms and protecting her people.

Martins, who now works with a team of young illustrators, quit his legal practice to put together the startup which has had over 20,000 app downloads since their latest release in January.

Akintoba Kalejaiye, the Content Director for Comic Republic said that apart from entertainment, the superheroes are also meant to educate and inspire young readers.

“There are a myriad of creators but popular African superheroes, we don’t have those, and you must understand that passing our own message across remains one of the subsets of our goal,” he explained.

According to a research by Professor Carol L. Tilley, Comic books are just as sophisticated as other forms of literature, and children benefit from reading them at least as much as they do from reading other types of books.

The comic market in Nigeria dates back to the 80s when traditional print publications like “Ikebe Super” was a favourite among comic lovers.