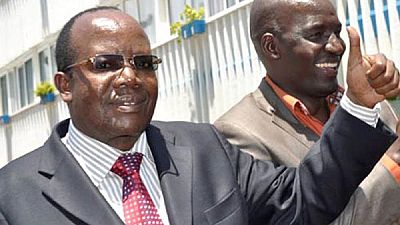 Kenya’s Nick Mwendwa has been elected as the country’s new football chief after he defeated his main rival, Ambrose Rachier, moments after outgoing boss Sam Nyamweya, announced he would not defend his seat.

Nyamweya, who had served as the FKF president since 2011, had pulled out of Wednesday’s elections citing pressure from his family.

I have made this decision out of love for the game, the passion and appreciation that no good leader should be pushed to give up power.

“I have made this decision out of love for the game, the passion and appreciation that no good leader should be pushed to give up power,” said the outgoing football boss.

However, the mood among delegates at the meeting of the Kenyan Football Federation suggested that he was going to lose in his bid to be re-elected football chief.

Five aspirants were vying to lead the federation.

Of the 77 votes cast, Nick Mwendwa garnered 50 votes while Ambrose Rachier received 27 votes. The rest of the candidates did not receive any votes.

We have an 8-year plan o turn football into a viable industry. 1 more step and we kick off #TeamChange #FkfElections pic.twitter.com/8yD5JZEoeu

Mwendwa is the chairman of a lower league side, Kariobangi Sharks, and has pledged to improve Kenya’s football standards.