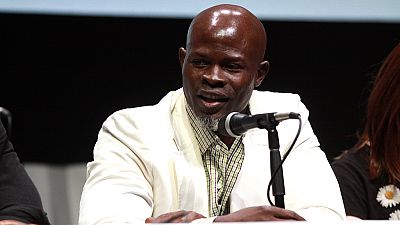 Dressed in white and adorned with pearls and loincloths, followers of Dan Air divinity, and Mami Wata, aquatic deity, go on procession amidst the thundering sounds from drums.

Hollywood actor and Benin Born, Djimon Hounsou joined the procession, only the initiated can approach. The actor is on a mission. He is filming a documentary to change the negative perception about voodoo.

“I’m like an African who returns home, who needs to know and have notions of culture,” says Djimon Hounsou. “The Voodoo, is a part of our tradition, our culture,” he added.

We thought it was time to change the narrative about Africa and voodoo is a story that was very badly told.

He said he became very curious about the ritual “after spending so much time in Europe and the US, and seeing a similar tradition in African diaspora that “resembles ours”.

The religion spread to the West Indies, southern United States and Brazil during the slave trade. But in Benin, “the religion is built around the forces of nature (air, water, earth, fire) and ancestor worship is very present”.

The In Search of Voodoo: Roots to Heaven started mid-December in a small village, southwest of the country.

The village was not chosen at random. “At Heve, these deities are still largely preserved and followers remained in the path of voodoo,” said David Koffi Aza.

Not Wicked or Wild

Djimon Hounsou is accompanied by Sorious Samura, Sierra Leonean journalist and co-director. The two men met nine years ago on the set of “Blood Diamond,” based on his documentary “Cry Freetown” which told the civil war in his country.

“We thought it was time to change the narrative about Africa and voodoo is a story that was very badly told. We think of witchcraft, magic and evil. Even we Africans do because it is so tucked into our psyche. What we want to do is like peeling an onion for people to understand what is in the heart,” said Samura.

“Djimon Hounsou is not promoting voodoo. He does not need it! It has existed for centuries, it is still there. It does not force you to come to him and does not discriminate,” he added.

He has starred in the “Gladiator” alongside Russell Crowe, “Amistad” by Steven Spielberg and co-starred with Leonardo DiCaprio in “Blood Diamond”.

He acknowledges that cinema has contributed to painting the negative, as the famous James Bond opus “Live and Let Die” where a dictator uses voodoo to inspire fear in the inhabitants of the Caribbean island. “This vision goes back to slavery. This is why we must clarify what defines voodoo. Those who practice here are not wicked or wild,” says the actor.

The budget for the film is yet to be revealed. Shooting ends on January 10, day of the voodoo festival celebration across Benin. The documentary is expected this year.