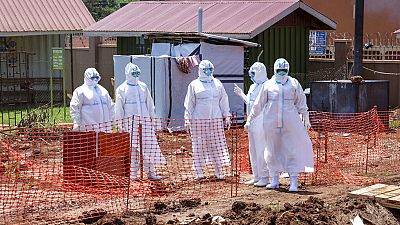 US President Joe Biden’s administration has announced it will screen US-bound travellers from Uganda for Ebola if they have travelled in the country within three weeks prior to their arrival in the US.

“Out of an abundance of caution, the (US) Centers for Disease Control and Prevention (CDC) and the Department of Homeland Security (DHS) Customs and Border Protection (CBP) will apply new layers of screening at these five US airports in response to the Ebola outbreak in Uganda,” the embassy added.

There have been no Ebola cases from the outbreak reported outside Uganda, and the risk in the U.S. is considered low. U.S. officials described the screening move as an additional precaution.

The administration says about 145 people per day enter the U.S. from Uganda, with most already arriving at the five large airline hubs.

The East African nation is battling a deadly outbreak of Ebola with many deaths, including four health workers, and a total of 63 confirmed and probable cases, according to the World Health Organization (WHO)

The outbreak appeared limited to five districts in central Uganda and had not reached the capital or the travel hub Entebbe, it added.

In February 2020, after the COVID-19 pandemic emerged in China, the former Donald Trump administration in the US barred the entry of most foreign nationals who had recently visited Uganda and put some American travellers under quarantine as the disease was declared a rare public health emergency.

The current outbreak has been attributed to the Sudan strain of the Ebola virus, which has no proven vaccine.

The UN’s health agency announced that several vaccines are in various stages of development against the Ebola outbreak in Uganda, adding that the vaccines used to curb recent outbreaks in the neighbouring Democratic Republic of Congo were not effective against the type of Ebola virus circulating in Uganda.

In the 2014 Ebola outbreak in West Africa, 11 Americans contracted the disease and two of them died.

The CDC and the WHO both provide information on how to diagnose and treat patients infected with the virus.