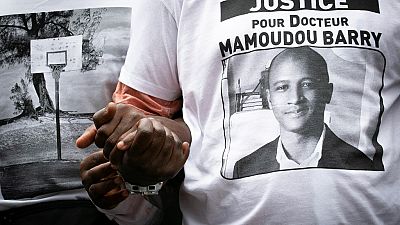 Was the 31-year-old Guinean researcher who died in Rouen in 2019 after being beaten the victim of a racist act? The trial of his alleged attacker, suffering from severe psychiatric problems, opens Wednesday before the assizes.

The accused, aged 32, interned in a psychiatric hospital in a unit for difficult patients since his arrest, appears for two days for having July 19, 2019, in Canteleu, in the suburbs of Rouen, "voluntarily committed violence resulting, without intent to give, the death" of Mamoudou Barry, 31, who succumbed the next day.

The alleged aggressor is also prosecuted for having committed these acts "because of the membership or non-membership" of the victim to a "so-called race or religion.

According to the prosecution, the victim's wife and mother of their then 2-year-old child, "consistently maintained that the accused had made racist remarks before assaulting her husband".

"You the blacks, you are sons of whores, one is going to fuck you this evening", launched, according to the young widow, this Frenchman of Turkish origin, making reference to the final Senegal/Algeria of the cup of Africa of the nations of soccer which was played this evening.

In front of the investigators, the accused admitted having said "dirty black" but without qualifying this insult as racist remarks.

The driver of the bus on which the attacker boarded after the incident also said that he had heard him say "son of a Catholic or Christian bitch".

The Licra and the Mrap are civil parties.

However, according to the prosecution, "it emerges from the hearings of the entourage" of the accused "that he was not in the habit of making racist remarks".

The lawyer of the accused, Herveline Demerville, does not "wish to exchange on the file before the hearing". In 2019 his then-lawyer, Selçuk Demir, said he had a "big doubt about the motive". "I do not think that Damien can be at the origin of a racist aggression," he had declared on July 23, 2019.

The violent blows make their little debate. The accused recognized them. The investigation showed that this man under reinforced guardianship since 2013 "could be violent", "especially when he was in breach of care", which was the case for one or two years at the time of the facts, according to the statements of his parents to investigators.

The accused suffers from schizophrenia manifesting itself by a delirious activity generating behavioral disorders of the aggressive type. His criminal record shows three convictions. This time he faces 20 years in prison.

"We can wonder how this profile of a person, with a long history, is not subject to a heavier control of the judicial authority", denounced Antoine Vey, the lawyer of the victim's family.

"It is such a violent and gratuitous act, in the middle of the street. Mr. Barry wanted to intervene to calm the accused who was attacking more or less everyone in the street and unfortunately, it happened (...) There is a whole community around them (the family editor's note), the Guinean community but also the university community of Rouen," he said.

The violent assault of Mamoudou Barry had caused strong reactions in France and Guinea.

Thousands of Guineans attended his burial in his home village on August 5, 2019. 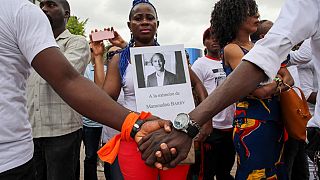