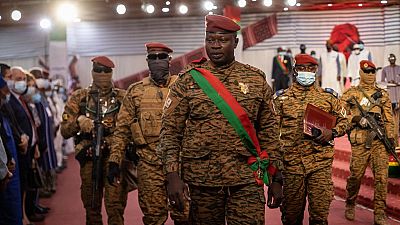 The head of Burkina Faso's ruling military junta will travel to Ivory Coast on Monday for his first official trip abroad since coming to power in January, according to the Burkinabe presidency.

Lt. Colonel Paul-Henri Sandaogo Damiba is due to hold talks with his Ivorian counterpart Alassane Ouattara on Monday and will return to Ouagadougou the same day, a source at the Burkinabe presidency told AFP.

Since he took over to run affairs of the country, during a putsch on January 24, Lieutenant Colonel Damiba had not yet traveled abroad.

Burkina and Côte d'Ivoire share a border of nearly 600 kilometers, and thousands of Burkinabe refugees have fled jihadist attacks on their country in recent years to seek refuge in northern Côte d'Ivoire, which has been less affected by the violence for the moment.

Burkina Faso, where the junta has promised to make the fight against jihadists its priority, is facing, like several neighboring countries, the violence of armed jihadist movements affiliated with al-Qaeda and the Islamic State group, which have caused thousands of deaths and some two million displaced people since 2015.