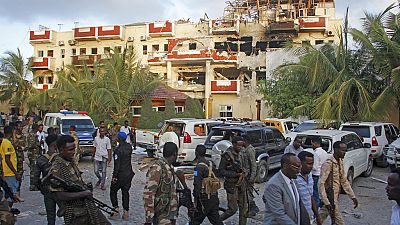 Somalia's prime minister has pledged that the government will be held accountable for the deadly Mogadishu hotel siege by Al-Shabaab jihadists whom he branded "children of hell."

Hamza Abdi Barre also called on ¬Somalis to unite in the fight against the Al Qaeda-linked group which has been waging a bloody insurgency in the nation for more than 15 years.

the radical Islamist Shebab attack on a Mogadishu hotel at the weekend that left at least 21 people dead and 117 injured.

"There is only one choice here: either we allow the shebabs - the children of hell - to live or we live. We cannot live together," he said.

"If their intention is to deter the courage of the Somali people who have decided to fight them, it will never happen and the fight against them has already started in many places," he said.

He called on "the Somali people to unite to fight the enemy and (...) to free themselves so that what happened there will never happen again," he added.

The radical Islamist Shebab, an al-Qaeda-linked group that has been fighting the Somali government for 15 years, launched a major attack on the Hayat Hotel in the capital Mogadishu on Friday night, which ended on Saturday night after security forces intervened.

According to Police Commissioner Abdi Hassan Mohamed Hijar, "106 people, including women and children", were rescued by the security forces.

On Sunday, rescuers were still trying to find possible survivors among the rubble and experts were working to detect possible explosives, AFP journalists noted.

The attack was the bloodiest since President Hassan Sheikh Mohamoud was elected in mid-May and the government took office in early August.

The Shebab have been driven out of the main cities of this country in the Horn of Africa, including Mogadishu in 2011, but remain established in large rural areas and remain a major threat to the authorities.

One of the founders and former commander of the shebab movement, now minister of religious affairs, Muktar Robow, alias Abu Mansour, condemned the attack and called on the fighters to leave the shebab.

"I call on them to repent. A person has the opportunity to renounce his wrongs as long as he lives," he said.

"Those who are sending you to do this, I know many of them and they have their children in Mogadishu University and would not send them to do this work. So I call on you to be wary, repent, leave them and go back to your society because there are still chances," he continued.

"Society should know that it is in its interest to unite to fight them," he added.

On Friday night, the Shebab stormed the Hayat Hotel, a popular meeting place for government officials crowded on the Muslim day of rest, detonating bombs and firing guns.