French President Emmanuel Macron will visit former colony Algeria on Thursday in a bid to improve strained ties between Paris and Algiers.

French-Algerian ties hit a low late last year after Macron reportedly questioned whether Algeria had existed as a nation before the French invasion and accused its "political-military system" of rewriting history and fomenting "hatred towards France".

Macron is to visit Algeria from Thursday to Saturday this week.

The North African country won its independence from France following a gruelling eight-year war, which ended with the signing in March 1962 of the Evian Accords.

On July 5 of the same year, days after 99.72 percent voted for independence in a referendum, Algeria finally broke free from colonial rule -- but memories of the 132-year occupation continue to haunt its ties with France.

French historians say half a million civilians and combatants died -- 400,000 of them Algerian -- while the Algerian authorities insist 1.5 million were killed.

But six decades on, despite a string of gestures by Macron, France has ruled out any form of apology for the colonial period. 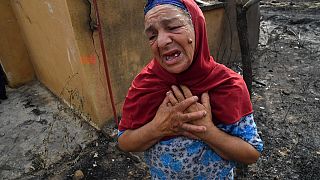