Serena Williams announced Tuesday her imminent retirement. The tennis legend won her first singles match for more than a year at the National Bank Open in Toronto on Monday but revealed in a first-person piece for Vogue magazine that she decided to end her career.

Coco Gauff, a prospect on the tennis circuit who's currently playing in Toronto shared her mind on the athlete's upcoming farewell tour.

"I knew it was coming eventually. I didn't know it was going to be this U.S. Open or the next one. Not really shocking, but almost shocking news because she's just been playing forever in my whole life, Gauff exclaimed. I don't know, a little bit sad because I've always wanted to play her. So I'm hoping that my draw at Cincinnati or U.S. Open or even here can work out so we can play each other."

The 23-time grand-slam champion broke the news in a first-person piece; describing it as "the hardest thing that" she "could ever imagine".

Two feet into tennis or out

Williams revealed she was trying for another baby during her absence from tennis for a year until Wimbledon this summer. She returned to the sport early in 2018 following the birth of daughter Olympia the previous year having been pregnant when she won her last slam title at the Australian Open.

"I'm turning 41 (in September), and something's got to give," she wrote in Vogue.

"We [together with husdband Alexis Ohanian] recently got some information from my doctor that put my mind at ease and made me feel that, whenever we're ready, we can add to our family. I definitely don't want to be pregnant again as an athlete. I need to be two feet into tennis or two feet out."

The many trophies she collected throughout her career and her family history inspired generations and will to live on: "I grew up watching her. I mean, that's the reason why I play tennis. Tennis being a predominantly white sport, it definitely helped a lot because I saw somebody look like me dominating the game and it made me believe that I could dominate, too [..] The Williams sisters story, not just Serena, with Mr. Williams and all that he's done for both of them, inspired my dad to continue to coach me and help me. Even though he had not really much tennis experience, but he was like, 'If Mr. Williams can do it, then I can'."

Williams has committed to playing at the Western & Southern Open in Cincinnati next week as well as the US Open later this month. The 40-year-old has become a force in the business world with her venture firm and other business activities including fashion lines. 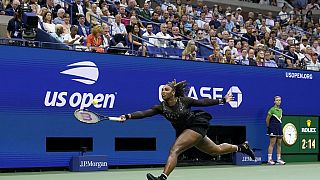 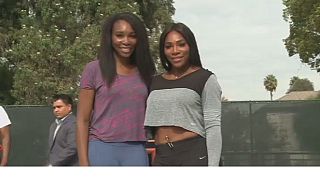 Venus and Serena Williams return to Compton; get tennis courts named after them

Venus and Serena Williams return to Compton; get tennis courts named after them