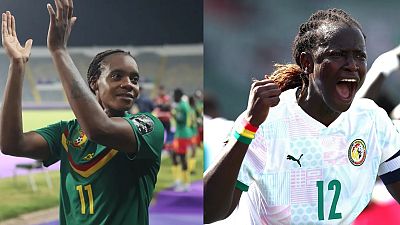 The Indomitable Lionesses and the Teranga Lionesses will play the inter-confederation play-offs scheduled in February after their win on Sunday.

Cameroon secured a narrow lead against Botswana to book their ticket for the inter-continental play-offs for the World Cup.

Striker Ajara Nchout scored the sole goal of the evening at the Stade Prince Moulay Al Hassan in Rabat (Morocco).

The Mares could count on their goalkeeper Sedilame Boseja who pulled off a string of fine saves. However, they did not succeed in scoring even if the Cameroonians had to put up with a 10-player squad starting from the 83th minute.

In the other fixture of the day, Senegal had to go through the shoot-out session to defeat Tunisia. During regulation time, both teams had beautiful goal chances yet failing to score.

With a 4-2 penalty shootout win, the Teranga Lionesses join nine countries from around the world in the inter-confederation playoffs set for 18–23 Feb 2023 in New Zealand.

In 2019, FIFA decided to expand the Women's World Cup from 24 to 32 teams resulted in more places for Africa. Consequently, the inter-confederation playoff has three additional slots available for the World Cup but ten countries must fight to grab the places.

Cameroon and Senegal will join Panama, Haiti, Thailand and Taipei who have already qualified for the competition to be played early next year.

WAFCON host Morocco, Nigeria, South Africa and Zambia will play at the World Cup after they all advanced to the last four of the tourney in the North African country.

The competition will be played from 18 to 23 February in New Zealand at the Waikato Stadium in Hamilton and Auckland's North Harbour Stadium.