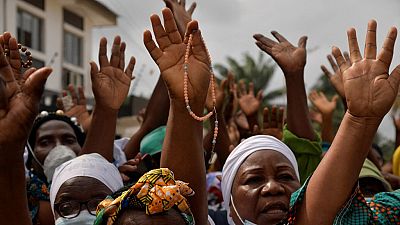 A section of women in Sierra Leon’s Freetown took to the streets on Monday, July 4 to protest the harsh economic conditions, which are making life unbearable.

Videos of the protest on social media sighted by Africanews showed the women holding placards showing inscriptions: indicating an increase in the price of commodities, and police brutality. The protestors called on the president to address the situation.

The women all dressed in black with handheld microphones chanted as they moved through the Central Business District.

Meanwhile, the leader and founder of the Unity Party Dr Femi Claudius Cole was arrested yesterday evening for allegedly inciting the women who had plans of staging the protests.

In a Facebook live session on Sunday, July 3, Dr Femi narrated how she refused an arrest by some armed men. She eventually reported to the Criminal Investigations Department until escorted by her lawyer and the police.

A tweet from the Dr Femi Claudius Cole Media Team says that the chairman of the National Grand Coalition (NGC) Party – Dr Dennis Bright who was at the Criminal Investigations Department (CID) to give her moral support was also being detained.