**As Kenya's general elections are approaching, tension between President Uhuru Kenyatta and his vice-president, William Ruto is mounting.**President Kenyatta has asked his Deputy to resign claiming he did not act enough for his country.

Following this comment, Ruto tweeted back that the last cabinet meeting had been organised two years ago and encouraged his leader to call him.

General elections are meant to happen next August and 47 candidates have already joined the race. Kenyatta can no longer stand for re-election after two terms, but William Ruto is resenting him for backing Raila Odinga, a former prime minister instead of him.

The tussle even invited itself during the state funeral of former leader Mwai Kibaki last Friday when the political opponents did not even shake hands. The president does not have the ability to get rid of his deputy even if he wished as he can only be removed through impeachment or incapacity.

Inflation has been a major issue in this election race. President Kenyatta announced a 12 percent increase in the Kenyan minimum wage last Sunday to compensate with the rising cost of living. 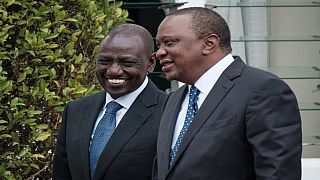