It is just the beginning for video gaming in Africa.

Gamers have more than doubled in recent years.

The market’s untapped potential is immense, with many expecting it to explode as the continent produces more content.

Until recently, gamers mostly came from the United States, Europe and Japan. But a shift is underway.

There is a big market waiting to be tapped.

_"We've got a lot of those publishers who are coming here and they want African-made content and so there's a huge opportunity. Now is kind of the best time really to be making games or trying to get into the games industry because we're hoping in the next few years we're going to see a massive spike in growth.", _Nick Hall, Africa Games Week Co-Organiser says.

Poor infrastructure and low connectivity have held back gaming on the continent.

But internet speeds and access are improving, equipment is cheaper.

Central African Teddy Kossoko is paving the way for the new market.

Since 2018, he has been creating games that tell the story of Africa.

"For me, the future of this industry, and not only this industry, is in Africa. It's the new El Dorado. Centuries ago there was a gold rush in America. Today, I believe this gold rush is happening here on the African continent, and we have to be first."

Teddy Kossoko moved to France aged 18 to study computer science and management. He started a studio in Toulouse which employs eight people.

"We must teach young people to love themselves, to value themselves. There is a huge problem with that. And for us, all this is at the heart of our creations. We really want people to deconstruct everything that has been put into their heads: that they are not beautiful, that they are useless."

Creators like Teddy Kossoko hope their games can eventually compete against those developed by the heavyweights of the sector. 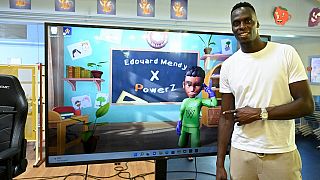