An atmosphere of enthusiasm reigns at "La Finca", the cathedral of boxing in Cuba, where "Los Domadores" are training intensively for their upcoming professional debut. "It was what we were waiting for a long time," says their captain, Julio Cesar La Cruz.

Cuban authorities gave the green light this week for Cuban boxers to participate in the professional circuits for the first time since 1962, under the tutelage of the local federation, and at the National Boxing School (La Finca) on the outskirts of Havana, the announcement was revitalising.

"He came to make us all happy and to give satisfaction to the whole boxing family," Rolando Acebal, 64, who has been at the helm of the "flagship" of Cuban sport, owner of 80 world and 41 Olympic titles, told AFP.

For 32-year-old La Cruz, a two-time Olympian and five-time world champion, the news came "at the right time". "It's going to be something beautiful, special and historic," he added, bathed in sweat, after almost three hours of sparring.

The "dancer" Andy Cruz (26), who won his first Olympic title at Tokyo 2020, is also "happy" because he will now be able to compete against "the best boxers in the world" in his category.

But there is another compelling reason to celebrate. According to the Cuban Boxing Federation, the fighters will receive 80 per cent of the income from each bout.

"This economic bonus will be very useful because many of us have families," says two-time Olympic champion Arlen Lopez, father of two children, as the country faces its worst economic crisis in almost 30 years, due to the impact of the pandemic and the strengthening of the US embargo.

Professional sport was abolished in Cuba by Fidel Castro's revolution, which encouraged the development of amateurism and brought the tiny island to the world's elite in some disciplines. In 2013, a timid comeback began with indirect formulas in sports such as baseball, in search of new forms of financing.

After five decades of non-professional practice, the local squad managed to adapt quickly to semi-professional boxing in the World Series (WSB), in which it debuted in 2014 with the "Los Domadores" franchise. He won three of the five editions in which he competed, including the last one, held in 2018.

Acebal is confident that there will also be no problems with the "adaptation" to the paid boxing that, in addition to disputing a greater number of rounds, is characterised by being more offensive and by a more forceful punching.

"We are already in preparation and these issues are being trained," he says, as he guides the training, which López considers "double" the usual amount.

Above all, he does not lose sight of the five boxers (La Cruz, Andy, López, Yoenlis Feliciano and Lázaro Álvarez) who will participate in Cuba's professional debut next May in Mexico, according to the contract signed with the Mexican company Golden Ring Promotions.

The joy of the announced opening went beyond the island's borders.

"This is great news for professional boxing", because "Cuba is a factory of champions", said the president of the Spanish Boxing Federation, Felipe Martinez, who is accompanying a group of fighters from his country who are training at La Finca with a view to Paris 2024.

For his part, Luis Mariano Gonzalez, Cuban coach of the team that France is putting together for these games and who is also training on the island, considered that "it is a step that will raise the level of Cuban boxing even higher".

The World Boxing Association (WBA), one of the four most important entities in professional boxing, opened "its doors" to the Cubans after learning of the agreement with Golden Rings Promotions.

"I think it's a new opportunity for Cuban boxers who live in their country," said its president Gilberto Jesus Mendoza, according to the Association's website, which has been the home of great Cuban fighters who left the island to try their luck in professional boxing, among them Yuriorkis Gamboa, Guillermo Rigondeaux and Luis Ortiz.

In fact, Acebal believes that the opening up of professional boxing could halt this exodus, which reached its most recent episode in March when boxers Kevin Brown and Herich Ruiz left the Cuban delegation participating in the Pan American Championships in Ecuador.

"If you're a little bit intelligent, you won't need to leave," he says.

The question now on the minds of boxing fans is whether the US embargo, which has been in place since 1962, will allow Cuban champions to participate in the main professional boxing events, which are usually organised in the United States. 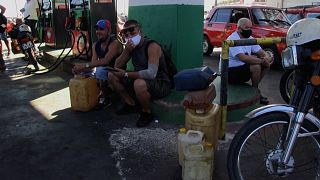 Long queues for petrol in Cuba

Long queues for petrol in Cuba