The Congolese army FARDC says a UN mission helicopter with eight peacekeepers on board was shot down in the middle of a mission to assess population movements in North Kivu on Tuesday.

"The helicopter was one of the two MONUSCO reconnaisance helicopters with on board eight Blue helmets crew members and United Nations observers" a FARDC press release said.

The incident comes as clashes between the M23 and the Congolese army continue after attacks on Sunday against positions in Tchanzu and Runyonyi, in Rutshuru territory (North Kivu).

The heavy fighting was reported to have left some Congolese soldiers injured and forced dozens of locals to flee.

"We have spoken with the governor, we have a military base in Bunagana and when there were the first wounded on the FARDC side, obviously welcomed on this base for the first necessary care", Khassin Diagne, Special Representative of the Secretary General for Protection and Operations said.

These new clashes between the Congolese army and M23 rebels have caused massive new displacements of the population.

"We have fled because of this war because we are afraid and we are suffering. What is happening is that we are the victims. Let the government help us and see how to chase away these rebels who are attacking us and let them go back to where they came from" a displaced woman Kabuo Sifa said.

Earlier on Tuesday, the Congolese army accused the Rwandan army of backing an active rebellion in the its troubled east, which Kigali denied

The move comes after months of growing suspicion and decades of mistrust including accusations from UN investigators against Rwanda and Uganda of supporting the M23. 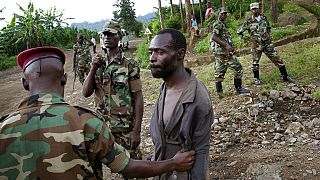