When Samson Akinyoola received the offer to play in Caracas, his first response was negative. "I don't even know Venezuela," he recalled saying... "I had to Google it," continued this Beninese attacker, "king" of goal in Venezuelan soccer.

"I saw that Caracas was a big team and that they gave a lot of opportunities to young talents, opportunities to show themselves," continued this 21-year-old player, a standout in the season that began this week.

He was runner-up with Caracas FC in 2021 and the top scorer in the league last year. With that jersey, he also made his debut in the Copa Libertadores, with two goals in four games.

"Akinyoola is like a king, Samson is a powerful man like me. I am powerful and a king. I am the king of Caracas in the Venezuelan league," he said in an interview with AFP after a training session.

His goal is clear, to return to Europe, although he claims to be a "global" player. "I am ready to play anywhere."

He played in Slovakia with FK Senica, after making his professional debut in Nigeria and before signing with the "Reds of Avila": it has been a journey for this young man who turns 22 on March 3.

Akinyoola was born in Porto-Novo, Benin, to a Nigerian father and a Beninese mother, although he grew up in Nigeria.

"I played in the streets first, then I went to the 36 Lion Club academy" in Lagos, he recalled. "I always thought I could be a professional player, everyone told me I was a talented player and I ended up at the academy and from there I started."

Slovakia was "the first opportunity traveling outside the country as a professional soccer player," he noted. "It was a bit hard, but I had to adapt."

A few months later came the chance to cross the Atlantic and play for Caracas, whose crest also features a lion.

It was a risky gamble to travel to a country going through an unprecedented political and economic crisis, although the club's president and heir, Philip Valentiner, is committed to investing in young local and foreign talent. He owns shares in several clubs in Europe and has already brought other African players into the team.

Akinyoola has adapted well to South America, despite being far from his son and partner, whose picture is tattooed on his arm.

He lives in an apartment in a popular neighborhood near the club, which he shares with a Nigerian and his teammate, Ade Oguns.

"I feel at home," he maintained, assuring that he has no fear in a country considered one of the most violent in the world. "It's like Lagos, we're used to it."

To kill homesickness, Akinyoola and Oguns brought spices and oils from Nigeria, which they mix with local ingredients to make their country's signature dishes.

Bad loser? "That's pretty good because I like competitive people. he gets upset when he doesn't score a goal even if we win. He's an ambitious guy," replies the captain who sees him "a great future."

Akinyoola is focused on his goal, which he believes will achieve by maintaining the good level of his debut.

"I have to concentrate," he said. "I feel like I'll be able to get back to Europe. Everyone should know Akinyoola." 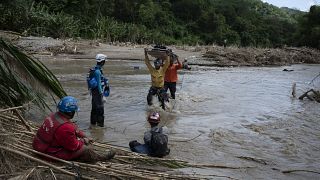 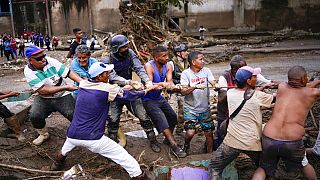