In Cameroon, the conflict between the English-speaking separatists and the rest of country has thrown the education of children into chaos.

In English-speaking areas many education establishments have closed down.

The crisis started in 2016. The director of the only school still open in this area is aware of the challenges ahead.

"Before the crisis, we had about 600 students... But it was only last year that I took the courage to come and reopen the school. And we slowly try, but we have not reached the challenge yet", laments Isaac Bissong, director of a school in an English-speaking region.

The violence has created a generation of children that are illiterate. Many fear for their long term prospects.

Therese Ohsi is a teacher at a bilingual school in Souza.

"Many children are traumatised. They lack furniture, there are too many of them in the class so it's difficult to control them. Sitting in a class, there are at least ninety (students) for every teacher, it is very difficult", she says.

The conflict has killed more than 3,500 people and forced 700 thousand people to flee their homes.

The secretary-general of the Norwegian Refugee Council visited one school and appealed for help.

"You can see the school, it's crammed beyond belief. There are 600 students here, nearly all of them are displaced children from the conflict to the West. So we need to help here. There is much too little support for Cameroonian children, for the displaced" admits Jan Egeland.

According to UNICEF, in 2019 more than 850 thousand children in English-speaking schools have been deprived of education. 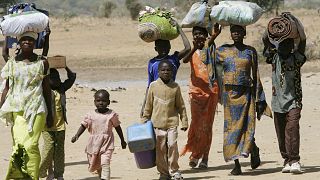