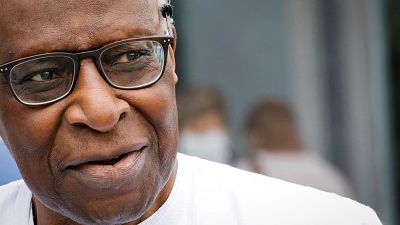 Lamine Diack, the former president of world athletics, died Thursday at the age of 88.

He was president of the International Association of Athletics Federations (IAAF) , from 1999 to 2015 after holding several political positions in Senegal.

Diack, who was also a powerful figure at the International Olympic Committee (IOC), was found guilty of corruption by a French court in 2020 for covering up Russian doping cases in exchange for millions of dollars of bribes

Diack's lawyers had claimed he was in poor health and would die in jail if sentenced.

Born in Senegal's capital Dakar, Diack attended university in France where he was a champion long-jumper in the 1950s. Afterwards he coached football in Senegal and helped manage the national team, which allowed him to transition into politics.

Diack was mayor of Dakar from 1978-1980, and later served as senior vice president of Senegal's National Assembly.

Diack became president of the International Association of Athletics Federations (IAAF) on 8 November 1999, and was re-elected for his fourth and final four-year term on 16 October 2011

Lamine Diack (born 7 June 1933), a Senegalese businessman and sports administrator, before he died he was awarded with the order of the Rising Sun, Grand Cordon in 2007.

Lamine Diack is known for having globalised the first Olympic sport. In accounting terms, television and sponsorship revenues amounted to more than one billion euros in 15 years. His death puts an end to the criminal proceedings against him.