Gabon is the first African country to be rewarded for its efforts against deforestation at the COP26 climate conference in Glasgow.

The Nkok Special Economic Zone (ZES), the flagship of the Gabonese economy in ten years has been ranked as the best industrial zone in the world in the timber sector by FDI Intelligence- a service from the Financial Times in 2020.

According to Igor Nyambie Simard, Managing Director Arise IIP and Arise IS Gabon; "the country obtained carbon neutral certification less than a month ago."

The nation, which is still dependent on oil, has undertaken a series of actions in favour of the transition to a green economy by relying on the ecosystems and the climatic and meteorological conditions of its territory. Tracer aims to contribute to the preservation of Gabon's wildlife and its vegetation.

Cécile Hervo, Tracer Technical Coordinator says; "Tracer is a desire by GSEZ since 2018 that all the woods that enter the Zone is legal wood. And so they have created an independent agency that will verify this. This agency is made up of two entities called Forest Resources Management, which is a private French company that has been involved in forest management in the Congo Basin for 30 years, and Brainforest, a Gabonese NGO that specialises in all aspects of governance and respect for people's rights in Gabon."

The main challenge of the Green Gabon operational plan is to reconcile the needs of current generations with those of future generations. However, human-wildlife conflict risks compromising the country's biodiversity conservation efforts.

According to Nicaise Moulombi, " The human-wildlife conflict in Gabon is a situation where the populations pay a heavy price to the benefit of international conservation. It is this challenge that must be reversed. This is why we call on ECCAS and the United Nations to help Gabon find the best mechanism." 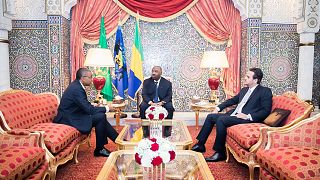