Uncertainty is back on the streets of Sudan's capital, Khartoum, in the aftermath of Monday's military coup.

Many residents erected barricades as the army continued to patrol the streets chasing demonstrators.

"General Burhan's decisions stole the revolution and stole the blood of the martyrs, the people who were martyred in the General Command (3rd June 2019). This is all the planning of the Popular Congress (Islamic party loyal to Bashir regime) to circumvent the revolution" claims sudanese resident, Mohamed Negm El-Deen.

In response to the latest developments many businesses remained shut for a third day in a row.

There are reports of at least six deaths amongst the civilian population.

Other citizens are critical of the civiian government and urge patience.

“What does the civilian government provide? Citizens are provided with living, treatment, schools, hospitals, many hospitals are closed, and I have a patient whom I have not been able to take to the hospital for four days, and also in the same time it is not right for people to do this (closing the streets), and they must be patient” said another Sudaneses citizen, Omar Hessen.

The general behind the coup, Abdel-Fattah Burhan, promised to hold elections in 2023 but many critics doubt his intentions.

The coup occurred just weeks before Burhan was supposed to hand over the leadership of the top ruling body, the Sovereign Council, to a civilian. 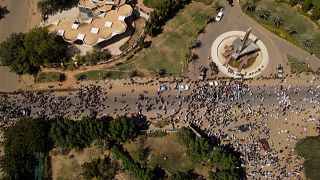