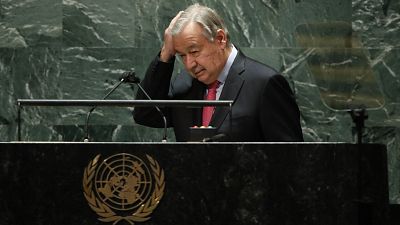 UN chief Antonio Guterres said Thursday that the current climate situation was "a one-way ticket for disaster" and stresed the need to "avoid a failure" at the COP26 climate conference in Glasgow.

The 2015 Paris Agreement on climate change, struck at the COP21 summit, called for capping global warming at well below 2C above the pre-industrial level, and ideally closer to 1.5C.

But current UN estimates indicate a "catastrophic" warming of 2.7C is on the cards.

Guterres said the present indications "show a pathway of at least 2,7C heating above pre industrial levels, and that’s obviously a one way ticket for disaster."

"The carbon pollution of a handful of countries has brought humanity to its knees and they bear the greatest responsability," he told an online press conference with members of the Covering Climate Now international project.

"I hope we are still on time to avoid a failure in Glasgow, but time is running short, and things are getting more difficult and that is why I’m very very worried. I’m afraid things might get wrong," he said.

"The G20 leaders will meet in Rome and they know their economies are responsible for four-fifth of planet carbon pollution," Guterres said.

"If they do not stand up ... we are headed for terrible human sufferings," he added.

He said: "China and the United States must do more than what they have announced so far."

Held between October 31 and November 12, the Glasgow gathering is seen as a crucial step in setting worldwide emission targets to slow global warming.