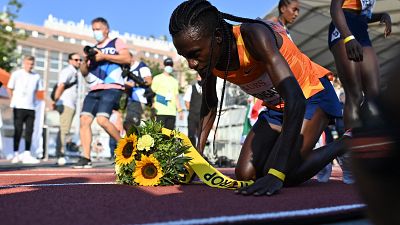 Burundian Francine Niyonsaba broke the world record in the 2000 meter race in 5 mins 21 sec 56 on Tuesday in Zagreb.

Niyonsaba, a hyperandrogenic athlete who was forced to abandon the 800m, her favorite distance, by virtue of the International Federation's rules, improved by more than two seconds the time achieved in 2017 by Ethiopian Genzebe Dibaba (5 min 23 sec 75).

Niyonsaba, 28, has established herself more than ever as a sure bet in the middle distance. The

Since her conversion to long distances, the silver medallist in the 800m at the Rio Olympics in 2016 has been making a string of brilliant performances.

After pacing through to the fifth position in the 10,000m at the Tokyo Olympic Games, she also became the fifth-best performer in history in the 3,000m on 28 August in Paris, before dominating the Kenyan Olympic runner-up and two-time world champion (2017, 2019) Hellen Obiri, twice in the 5,000m in Brussels and Zurich.